05/04/2018 The King Abdulaziz Center for World Culture in the heart of the Saudi Arabian oilfields was a remarkable project. It called for seele to turn the design by the Snøhetta architectural practice into a structurally and aesthetically challenging solution in the form of a façade made entirely from stainless steel tubes. Only by combining the very latest IT methods and software solutions did this project come to fruition.

Gersthofen, 4 May 2018. According to the plans of the architects, the five separate buildings of the King Abdulaziz Center for World Culture should shine in the sunlight like bright “pebbles”. To turn that vision into reality, façade construction specialist seele created a building envelope as a completely free-form surface using thousands of stainless steel tubes bent in three dimensions to cover a total area of 30,000sqm. The tallest of the spectacular, three-dimensional, free-form shapes rises 90m into the sky. All the tubes are fixed to a supporting structure made from a weatherproof, unitised building envelope clad with sheet metal joined by standing seams. The tubes are attached to so-called pins that compensate for the different movements of the building envelope and the tubes. In order to do justice to the high quality standards and the special demands of the desert climate, seele shifted much of the work to the preparatory phase in line with Industry 4.0, where the very latest 3D planning and parameterisation, maximum knowledge of the materials and extremely demanding logistics were all crucial.

Every tube is unique
To achieve the organic form of this complex, every one of the roughly 70,000 stainless steel tubes (which, laid end to end, would total 360km) made from 1.4462 duplex steel has a unique geometric form. The reference point for geometry, design, production, dimensional checks and erection was the tube’s virtual centre-line. The distance between adjacent double-curvature tubes is exactly 10mm. Every tube had to be marked and bent corresponding to its subsequent position on the structure, and some needed for the sunshades around the windows had to be crimped as well using a technically complex method. So-called transitions were necessary where the round tube changed to the so-called squashed tube. It required the expertise of seele’s experienced engineers to complete this geometrically challenging building envelope. Such a façade of stainless steel tubes spanning across all storeys had never been built before – and hardly anyone believed it would be possible. Therefore, many tests were necessary, plus special programming for the bending and measuring on the free-form bending machines.

Initially, it took four tests to produce one correctly bent tube. In order to guarantee that the tubes would be produced efficiently, seele identified the problems and devised a clever solution to reduce the wastage to virtually zero: Special programs were written in the C# language for the bending and measuring machines so that they could communicate with and learn from each other. Mistakes during production could therefore be reduced to less than 3%. Stefan Kloker, senior structural engineer at seele, describes what happened: “With the help of the programming and then collecting the data in a database, we were able to build a mock-up and get the self-learning machines up and running within four months. The solution was to back-calculate the final geometry of the bent tube to a straight tube prior to bending, simulate the bending process, check the accuracy of fit and then produce the tube after checking all the data. As every specific data record is stored, it can be reconstructed at any time.”

Therefore, many factors were already incorporated in the production process: extremely tight tolerances, the behaviour of the material, the accuracy of the fitting of the tubes together and the fixing to the supporting structure. Owing to the material properties, there was only one chance per tube to get the bending and twist right, because re-bending in the machine was impossible. Bending the tubes beyond their required shape accounted for the springback of the steel. The engineers at seele also had to take into account the markings and the drilling for the fixings in their calculations so that the positions would be obvious after bending and the drilled holes would be in the right places. The bending machines developed new algorithms automatically via an integral measuring system which were then used as the basis for performing each bending process. This project required seele to develop not only a solution for the construction, but also the software for the self-learning machines.

Production of stainless steel tubes according to Industry 4.0 principles
Every tube was bent, and the tube ends tapered for the connections, on bending and measuring machines according to precisely generated 3D data. The exact erection sequence also had to be specified in advance through computer simulations. Despite the fact that every tube is a one-off, they were categorised according to their connections in order to reduce the complexity of the parts. Consequently, every tube required individual instructions in the form of precise QR codes and laser engraving automatically applied to each tube. After production, every tube was wrapped separately by seele to protect the surfaces. They were then packed in crates to match the erection sequence on site and the crates delivered to the site in a fixed order. By scanning the QR codes, the site crews could identify the tubes and their position on the building by way of a 3D model. “All phases of the project – from design through production to erection – benefited from the use of a coherent system throughout. Erection procedures on site in the desert of Saudi Arabia were distinguished by efficiency and economy. As a result of the perfectly planned logistics and ingenious preparations, not one of the tubes was wrong or missing when work was carried out on site,” says Jürgen Laky, managing director of seele middle east FZE.

The outcome of this highly complex construction project is convincing from any angle. The façade to the King Abdulaziz Center wraps itself around the building without any steps or edges, has harmonious rounded features and tubes that run perfectly parallel. Once again, seele has demonstrated its power of innovation, which in this project involved really expert programming. 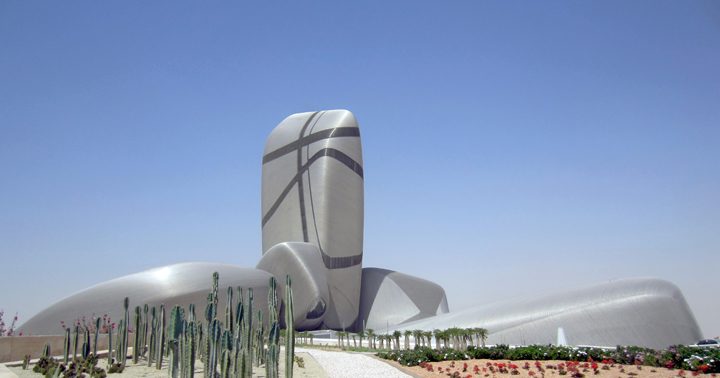