03/11/2016 Swabian facade and glass specialist seele is a typical “hidden champion” in the German economy. Apple CEO Tim Cook has praised the Germans’ work in the highest terms.

Gersthofen (dpa) – Swabian facade and glass specialist seele doesn’t even have a Wikipedia entry yet, and on the way out to the Gersthofen industrial park north of Augsburg our taxi driver has to ask directions. Few people in the area are familiar with the company in this small town north of Augsburg, which has played a key role in several stunning architecture projects. These include the 185-meter twin towers of the European Central Bank in Frankfurt, the National Stadium in Beijing and the distinctive cube design of the Apple Store on New York’s Fifth Avenue.

seele wasn’t allowed to talk about its big customer Apple for a long time. But that has changed since Apple CEO Tim Cook visited the factory of seele subsidiary sedak, after which seele – the hitherto largely unknown “hidden champion” of glass construction technology – has moved more into the spotlight. The Fifth Avenue store in New York was one of Apple’s most special outlets worldwide, Cook said. Without seele Apple would not have been able to build it the way it is.

Speaking to sedak employees on Monday, assembled before a glass segment 14 meters long and 3.20 meters high, Cook declared: “You’re the best in the world!” This huge facade pane is the Swabians’ last delivery for the futuristic Apple Campus 2, home of the new Apple headquarters in Cupertino, California.

seele subsidiary sedak, formed in 2007 as an independent glass manufacturer, produced over 800 of these panes. The canopy panes come from Gersthofen as well. And the actual facade including metal structure was made in Swabia too. Specialist firm Josef Gartner GmbH – located in Gundelfingen about 50 kilometers away from Gersthofen as the crow flies – integrates and installs the seele panes in the Campus facade.

Company founder Gerhard Seele (age 59) is pleased at how cooperating with Apple has led to such a solid partnership despite the geographic distance between the two enterprises and their difference in size. Nelli Diller, managing director of seele GmbH, has noted how Apple architects and designers have clear ideas of what they want and a high standards bordering on perfection. “We encourage each other and are always pushing to sound out the boundaries of the feasible, so we can try new ideas.”

In Gersthofen Tim Cook talked about how his predecessor Steve Jobs spent the last years of his life developing the Campus 2 concept and put much of his energy into it. “We were looking for someone, not just in the USA, but worldwide, who could implement Steve’s ideas, and this is where we ended up – because no one else can do it as well as you.”

seele had to look beyond its own horizons in the conventional glass industry to get the job done for Apple. Thus in October 2012 a 220-ton, 17-meter autoclave was unloaded off a flat-bed trailer in Gersthofen. An autoclave is a sealable, gas-tight pressure vessel used principally in the aerospace industry, but seele wanted to use the autoclave like a giant oven to process glass.

Since the founding of the company in 1984 seele has steadily grown, landing contracts for airport projects like Hong Kong’s Chek Lap Kok, Munich Terminal 2, Berlin (BER) and the ICE train station at Cologne/Bonn airport along with other projects including Seattle Central Library and the collaboration with Apple. The mid-sized enterprise currently has a workforce of roughly 1,000 employees and annual sales of around 200 million euros. After completion of the panes for Apple Campus 2 the next milestone up ahead is already known: the “iconic skin SCF” system, developed to make manufacturing of individually designed facades with optimum insulation values much easier than has ever been possible before. 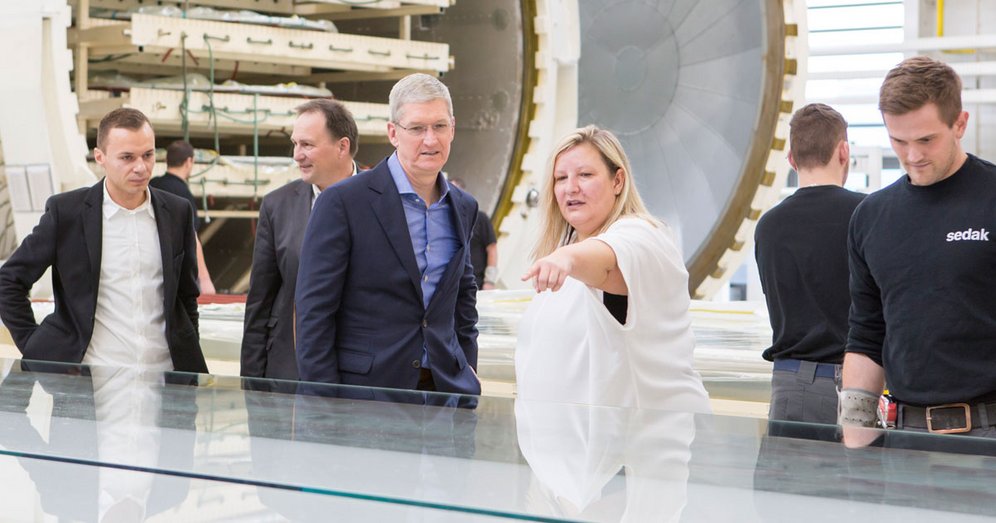