07/10/2017 Leading façade construction specialist seele, with offices in Toronto and New York, has supplied Cadillac Fairview with a new steel-and-glass footbridge in the centre of Toronto, Canada, at very short notice.

Toronto, 10 July 2017. The CF Toronto Eaton Centre Bridge, a roughly 35m long footbridge weighing approx. 200t, was lifted into its final position on 7 July 2017. Located at third-floor level, it spans over Queen Street West between the Hudson’s Bay building and CF Toronto Eaton Centre (CF TEC). The new CF TEC Bridge replaces an older footbridge and fits in with the bridges system of the city centre.

Visually, its design creates a smooth transition between the two buildings. The initially twisted brass portal frames on the historic Hudson’s Bay building side resolve into a stricter glass design language that blends in with the modern architecture of the CF TEC building. The scope of seele’s work covered the design, fabrication and erection of various panes of laminated glass, bronze-coloured brass plates, handrails, stainless steel open-grid flooring and structural steelwork. Owing to the challenging shape of the steel-and-glass design, every brass plate is a one-off in terms of its geometry and the milling work required. The design by Wilkinson Eyre Architects called for circular ornamentation to be milled into the brass plates during the fabrication work in Germany and subsequently treated in an acid bath in order to achieve the bronze-coloured patina. The plates were attached to the steel portal frame on site in Toronto.

One particular challenge of this project was the demanding erection procedure on Toronto’s most important shopping street. The old bridge between the two buildings had to be removed and the new bridge installed within an exactly defined time-slot. The new CF TEC Bridge was completely pre-assembled just around the corner in James Street. That entailed delivering the primary and secondary steel structure, glass, brass plates and all further components to James Street for assembly there on temporary staging. Afterwards, the bridge was raised hydraulically with the help of a modular vehicle and transported to its final position on Queen Street West ready for lifting into position. And that involved closing this busy street on two weekends. Installation work on the bridge in its final position above the street is ongoing and will continue until the Autumn of 2017.

Toronto-based seele canada Inc. was responsible for managing the project. During the work, the office was tightly integrated into the global network of the seele group of companies and thus able to call on all the group’s resources in design, production, testing, etc. This is already the third project that seele has completed in Canada; another was the modernisation of the Canadian Parliament in Ottawa. Further projects will follow. Andreas Hafner, managing director of seele canada Inc., sums up the situation thus: “With our offices in Toronto and New York, seele is excellently positioned to serve the North American market. Being close to clients is an advantage, enabling unique building envelopes to be built exactly according to the designs of ambitious architects.” 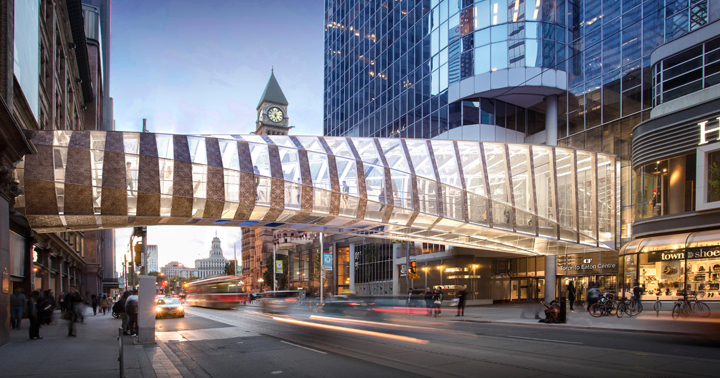