03/26/2021 33rd Street Penn Station Entrance has been open for nearly three months now. Time for Stefanie Manger, editor-in-chief of German trade magazine "metallbau", to recap the construction in the heart of New York in the current issue (3/2021). Stefanie spoke with seele’s Site Manager Dennis Rohrbacher about his everyday life and challenges on the construction site.

The magazine has published a feature article about 33rd Street Penn Station Entrance along with the interview below. Read the full original article (in German only) here.

Stefanie Manger: To what extent was the Penn Station site a special job for you?
Dennis Rohrbacher: Penn Station entrance was remarkable due to its technical requirements and public focus. The time pressure for completion was clearly noticeable. Personally, working with an outstanding team makes it special for me.

Stefanie Manger: What was your worst fear regarding the assembly on site? What provisions in general have been made?
Dennis Rohrbacher: In general, installation work at seele is planned very precisely in order to eliminate the unforeseen. In New York City, delays in particular are associated with high costs. The cable façade of Penn Station was therefore completely preassembled on the test site of our steel construction company seele pilsen in the Czech Republic. The responsible Installation supervisor also accompanied the assembly in New York.

Stefanie Manger: Which technical challenges did you face on site?
Dennis Rohrbacher: You cannot simulate the exact access to the different components, the material distribution and the shape of the components. Additionally, in the case of the steel-and-glass-canopy, the challenge was that the entire construction was built over a hole in the road, as below was the access to Penn Station. At the same time, other cladding work with cantilevers and overhead cladding was taking place in this opening. We therefore had to use various platforms and working cranes for the assembly. Material was moved with the help of chain hoists, material lifts, mini cranes and modified suction systems. During the assembly of the glazing, mountaineering equipment was used to be able to assemble safely in the vertical working areas.
The handling of the many free forms was a challenge; there was almost no plane component. All parts had to be measured to the millimetre. Without the use of a total station that was supplied with coordinates from the 3D model, this would not have been possible efficiently.

Stefanie Manger: What were the logistical requirements?
Dennis Rohrbacher: 33rd Street between 7th and 8th Avenue has not been an "active" street for a long time due to the reconstruction of the entire area. This meant that we had an own small "drive through" for deliveries. In general, New York is not as "narrow" as one might imagine. The streets and avenues have several lanes, so often one lane is closed for a delivery without causing traffic chaos. Of course, a permission is required.

Stefanie Manger: Have you had tools and welding technology delivered from Gersthofen?
Dennis Rohrbacher: seele has been operating in the USA for many years, so we don't have to adapt equipment. We mainly use local technologies and fall back on German equipment for very special requirements. For the Penn Station entrance, for example, a German screw clamp cylinder was used to connect the steelwork.

Stefanie Manger: What has to be considered when installing curved glass on site?
Dennis Rohrbacher: The curved glass panels were bent by sunglass industry in Italy. The installation does not differ from the installation of other glass. Only the shape and application of the hoist must be adapted accordingly. For the installation we have modified and certified a suction unit with adjustable suction plates.

Stefanie Manger: How long were you occupied with the assembly of the subway entrance at 33rd Street in NYC?
Dennis Rohrbacher: We were on site from March 2020 to January 2021 including site preparation and finishing work. Assembly took place from June to December 2020. In particular, the lifting and assembly of the large steel components and the tensioning of the stainless steel cables was definitely impressive. Lowering the entire construction onto four support points was also a real highlight. Working in the almost deserted streets of New York was a special experience. Work continued on the construction site despite the lockdown because it was a public transport construction site.

Stefanie Manger: Did you use your stay in NYC for sightseeing?
Dennis Rohrbacher: I have been working for seele in the USA for almost six years and was involved in the assembly of the Apple Campus in California and the Apple Flagship Store in San Francisco. I'm in New York for over three years now, so the "opportunities" have become a daily routine by now. But, I still like to spend my time to learn more about the country and its people.
And of course I also like to stop by some finished seele projects, like the Nike Flagship Store, Apple Cube, Puma Flagship Store and the Moynihan Train Hall. 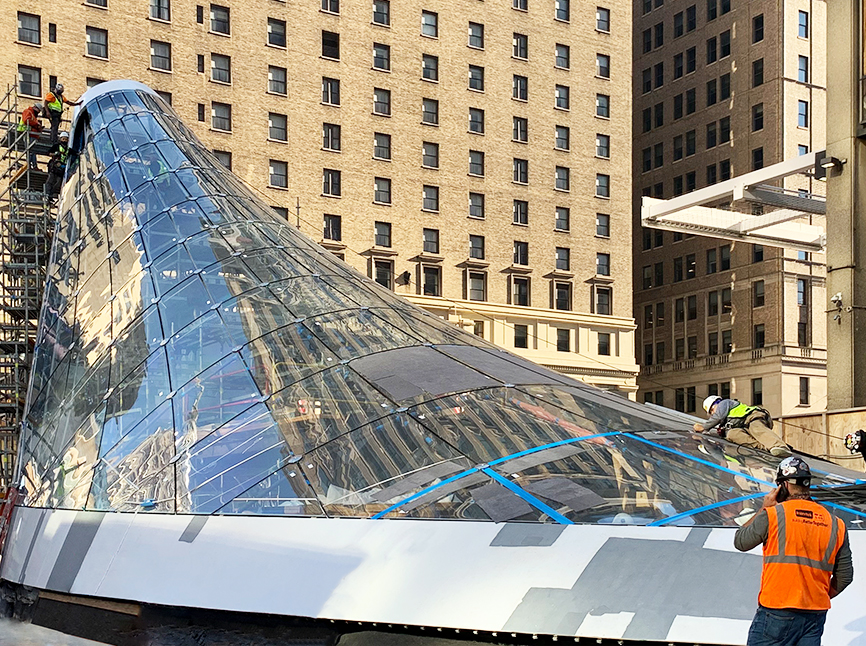