seele completed the façade of Principal Place Commercial in London

04/25/2017 In June 2014 the development of the Principal Place façade has started. Recently the last elements were installed by seele. The new building is located in the East End of London.

seele has been assigned with the design, production and assembly of 1,806 façade elements. Following the plans of Foster + Partners seele realized a 28,000sqm building envelope in a extensive and light way.  The dark bronze anodized colour and rough surface link to the industrial history of Shoreditch. Principal Place Commercial is a new office building that features 55,700sqm of Grade A office space over 15 storeys with typical floors of 4,181sqm and nearly 4,047sqm of roof terraces.
Large SCF (Self Conditioning Façade) elements measuring up to 7.5m x 4.2m are being fitted by seele on the topmost floor of the building. The SCF elements for the upper levels of Principal Place Commercial are the largest seele has yet installed. Not only the dimension, but also the system was demanding: SCF is based on a multilayer façade element with a wider cavity. A continuous exchange of air takes place through natural ventilation at the base of each element and further openings near the top. All in all seele implemented the purist and energetic design of the unitised façade without compromise. 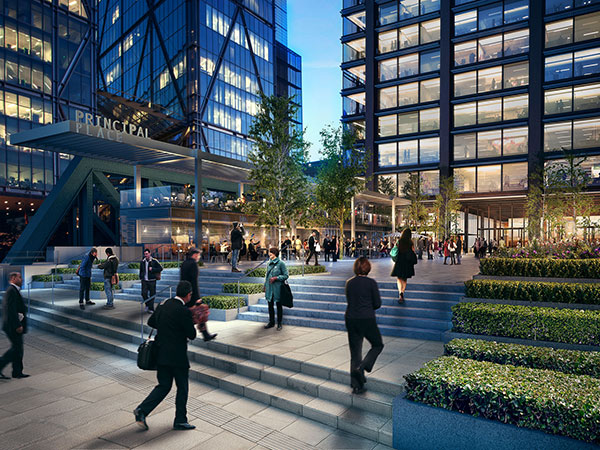