05/21/2019 In 1984, the façade construction specialist seele, based in Gersthofen, was founded by master glazier Gerhard Seele and steel construction designer Siegfried Gossner. Through the worldwide realization of technical façade constructions and sophisticated building envelopes, the company grew steadily. "With this company, we wanted to bring the glass and steel trades together to offer projects from a single source," says Gossner. "That did not exist in this form at the time". Today, around 1,000 employees work for the entire group worldwide. This year the company is celebrating its 35th anniversary.

Gerhard Seele and Siegfried Gossner founded seele GmbH in 1984 and by the end of the first business year the company had grown to almost 40 employees. The two managing directors quickly developed their own patents in glass roof and façade construction and made a name for themselves in the region with the successful execution of interesting projects. In 1986 the construction of the new company building began in Gersthofen, where the company's headquarters are still located today. The following years saw the realisation of regional projects such as the town hall in Neusäß (1988) or various steel and glass constructions for the Augsburg Zoo. Due to the constant growth, seele expanded its company building with a "glass production". This glass hall, designed by the architects Kaufmann, Theilig und Partner, still shapes the appearance of the location today.

10 years after its foundation, 240 employees were already working for the company. Some of them are still working for the company today. For example, Günther Mayer, who was already part of the company before it was officially founded and is thus celebrating his 36th anniversary this year: "I was there right from the start and was able to experience up close how the company has grown steadily and gained international importance. From Gersthofen, as a trained technical designer and now as Senior Design Manager, I had the opportunity over the years to work on unusual projects for renowned architects," says Günther Mayer looking back.

In the 1990s, seele realised renowned projects such as Munich Airport, the Munich State Chancellery, the Linz Design Centre and the New Leipzig Trade Fair Centre. The increasing demand for seele's expertise required worldwide expansion. In 1994, locations were established in Austria, France, Great Britain, Hong Kong and Singapore. Shortly afterwards, the USA, the Middle East and, in 1996, the establishment of the company's own steel construction production facility in the Czech Republic followed. Today there are 15 locations worldwide.

Entry into the product business

With the foundation of the independent company sedak in 2007, the seele group of companies entered the product business. sedak is a premium manufacturer of oversized insulating and safety glass of the highest quality and impresses with maximum formats of up to 20m in length in serial production. In 2013, another company was founded in the product business: As a manufacturer of construction elements, iconic skin offers modular, thermally insulated products such as GSP® and ISOshade®.

Highlights from the world of façade construction in 35 years

From New York, London and Hong Kong via Tokyo to Melbourne - the façade specialist seele stands behind the façade of outstanding buildings. For 35 years, the deep understanding of the materials used has resulted in unique solutions made of glass, steel, aluminium, membranes and other high-tech materials. For example, the first major order in Asia followed in 1998: Hong Kong Airport. The Maximilian Museum in Augsburg is also one of the highlights with its self-supporting overhead glazing in barrel form with only 7kg of steel per square metre. The cooperation with Apple, which has been in existence since 2001, has been the main reason why seele has attracted worldwide attention. The spectacular glass cube for Apple on 5th Avenue in New York shows the unique competence of seele in the field of all-glass construction. seele received the accolade in 2015 when Apple CEO Tim Cook visited seele in Gersthofen. The company's history is marked by superlatives of technological progress in façade construction, project highlights and courageous corporate decisions. The seele group is regarded as an innovator in façade construction. "New challenges, which not everyone dares to face, attract us, and we can count on outstanding employees to find solutions, who help shape the future of our company every day," says Gerhard Seele. 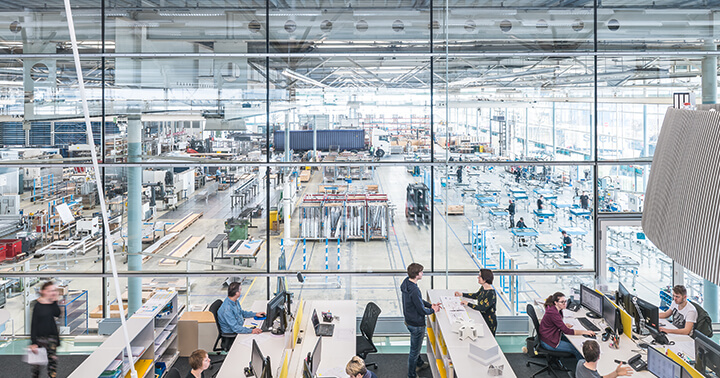