06/08/2021 Two specialist disciplines come together in skybridges: bridge-building and façade construction. With the erection of the 35m long Capricorn Bridge, façade specialist seele once again demonstrated its expertise in the implementation of connecting bridges.

With its unusual shape, the bridge's steel and glass construction sets a design accent in Düsseldorf's Media Harbour. Once again, this demonstrated seele’s in-depth knowledge of materials, structural design and ingenious erection concept in the construction of footbridges.

The unusual, apparently floating design of Capricorn Bridge is due to the bridge structure based on a framework of tubes and the arrangement of trapezoidal and triangular insulating glass units. According to the design of architects SUPERGELB Architekten (former Gatermann + Schossig), seele designed a space frame, as this footbridge was built subsequently and does not transfer any loads to the buildings it connects. It was commissioned by Projektgesellschaft Pirol Holzstraße GmbH + CO now connects the “Float” office building with Capricorn House on the opposite side of the road. Therefore, the structure consists of a central pier and two arms. All the loads are carried by the central pier, which is made up of 13 circular columns that are anchored in the subsoil via three bored piles. The bridge structure itself consists of a framework of tubular members: eight steel polygons plus longitudinal and diagonal members as the loadbearing steel framework for the glazing. Structural engineers for this project were osd (office for structural design) and Wilhelm & Partner.

The bridge was erected by seele in three segments. To do this, the central pier and middle part of the bridge structure were delivered to site prefabricated in three pieces, then placed on temporary supports before being lifted into position. Once the central pier had been anchored, the two prefabricated cantilevering bridge arms, weighing 12 and 26t, were lifted into position and secured in just one weekend. All glazing works for the bridge, involving about 60 elements in sizes up to 8.1 x 3m, and the central pier were completed very quickly. The unusual feature here is the triangular panes with acute angles plus their restraint-free support concept allowing for the significant deformations of the bridge compared with traditional façade construction. The central pier supports the cantilevering bridge arms – 12m to Capricorn House and 20m to the “Float” building.

The structural concept is one key factor that defines the design. At the same time, user requirements (clear width/headroom, barrier-free layout, non-slip surfaces) and the building physics specification for the “bridge façade” (thermal/sound insulation, etc.) must be taken into account. One of the greatest challenges is achieving a precisely detailed transition to the building.

Building envelope made of brass and glass: CF TEC Bridge

The CF TEC Bridge in Toronto, realized in 2017, shows that seele is a specialist when it comes to filigree construction and outstanding execution quality. The footbridge made of brass and glass and designed by Wilkinson Eyre Architects, today, CF TEC Bridge links the Hudson’s Bay Shopping Mall and the Toronto Eaton Centre (TEC).

The scope of seele’s work covered the design, production and erection of the laminated glass, commercial bronze plates, handrails, stainless steel flooring and structural steelwork. The initially twisted brass portal frames at the Hudson’s Bay building end resolve into a stricter glass design language that blends in with the modern architecture of the TEC building, thus creating an apparently fluid transition between the two buildings. Owing to the challenging shape of the steel-and-glass structure, every brass plate was a one-off in terms of its geometry and the milling work required. Circular ornamentation was milled into the plates during the fabrication work before they were treated in an acid bath to achieve the bronze-coloured patina.

Erection in one piece

seele’s ingenious erection concepts and detailed planning result in trouble-free transportation of the bridge and positioning with millimetre accuracy on the supports on the buildings.

Footbridges and their building envelope made by seele were based on different approaches and demonstrate the diversity in terms of the configurations and materials used for modern skybridges. Such bold designs are only possible with good interdisciplinary cooperation between owner, architect and engineer in combination with very latest design and production methods. 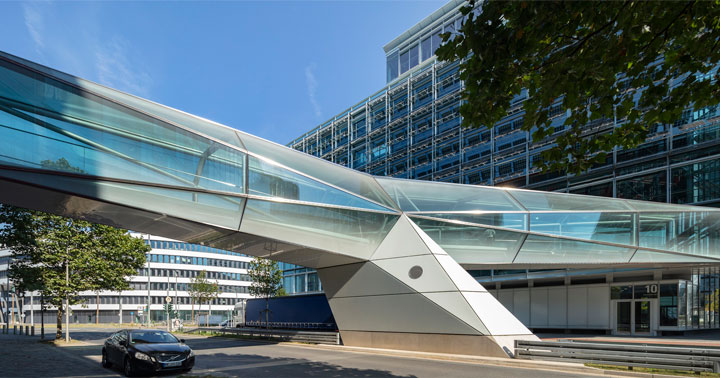