08/03/2018 Comprehensive tests are usually necessary when designing complex building envelopes. In particular, depending on the applicable standards, critical construction details for bespoke solutions with challenging geometry may have to be tested under extreme thermal cycles. For its international projects, façade construction specialist seele exposes scale mock-ups to extreme conditions in appropriate tests.

Gersthofen, 3 August 2018. Safety and the consideration of thermal cycles are important aspects for complex building envelopes with bespoke designs. Besides the guidelines in applicable national and local regulations, the materials and forms of construction must be able to react to moisture and temperature fluctuations without the materials decomposing, without unacceptable deformations or noises. Performance tests carried out on accurate scale models of the assemblies, so-called mock-ups, are crucial for ensuring compliance with specifications. Façade construction specialist seele has set up a testing facility at its headquarters in Gersthofen specially for this purpose. This is where the scale mock-ups, e.g. a model of the roof for the West Block rehabilitation project measuring 12 x 8 x 4m, are built so that the tests specific to a country can be carried out.

Fluctuating temperature conditions and the interpretation of movements, tolerance concepts and test methods for checking safety and reaction to thermal loads are described in various standards and directives. Knowledge of the actual ambient conditions, the physical properties of the façade and the interaction of the subassemblies are crucial for planning. Scale mock-ups containing all the components with their intended level of quality are built to enable comprehensive tests to be performed to establish sealing functions, the safety of the components and the response to temperature changes. The aim is to estimate the loads in critical situations so that important findings can be obtained regarding how the design performs.

The thermal cycling tests carried out for seele’s Canadian projects
One typical test involves testing a scale segment of a representative and critical area of the structure (full-scale performance mock-up) for its airtightness, watertightness, serviceability under wind loads, response to structural movement and failure limits. In the thermal cycling test method, the structure is exposed to extreme temperature loads, with the exact procedure varying depending on the requirements of the particular country. seele applied the American regulations for its Canadian projects – Brookfield Place in Calgary and the West Block rehabilitation project in Ottawa. Conventional heating and cooling of the outside air around the mock-up was employed in these cases. The target parameters for the high- and low-temperature phases were the air temperatures defined in the standard. Based on the results of the tests, seele produced a standard time–temperature curve showing the times at which the target temperatures were reached.

Mock-up required for conducting temperature tests
In addition to the pressure-tight test chamber necessary for the weathering tests, an additional, enclosing, sealed test chamber plus air-conditioning equipment to regulate the temperatures were required in order to be able to carry out the thermal cycling sequence. Constant temperature conditions were maintained inside the corresponding interior of the mock-up, while the exterior of the mock-up was subjected to the changing temperatures according to the defined test cycle. The recommended design for the test chamber was developed by seele on the basis of experience with thermal cycling tests carried out in the past. In the case of the Canadian projects, Brookfield Place in Calgary and the West Block rehabilitation project in Ottawa, three mock-ups were built in different sizes and tested by seele under varying test parameters. Owing to the extreme climate in Calgary, the normal temperature range of the AAMA 501.5-07 standard was modified in the project specification to reflect the test results. Therefore, depending on the mock-up, testing for the Canadian projects was carried out with an extreme temperature range of -35 to +82°C. Fig. 2 shows the test chamber with air-conditioning equipment and trailer with tank of liquid nitrogen during the thermal cycling test for the pavilion at Brookfield Place (Calgary, Canada).

Special status of research and development
seele successfully completed the tests required for the Canadian projects. The way in which conventional façades and bespoke designs perform can be taken into account right from the design stage by complying with the relevant dimensional and tolerance concepts accordingly. It is important for planners, designers and fabricators to understand the different sealing systems and connections between components and be able to determine the presumed movements. seele has many years of experience with international construction projects and so this knowledge is second nature, allowing the company’s engineering skills to be deployed worldwide for special construction projects. 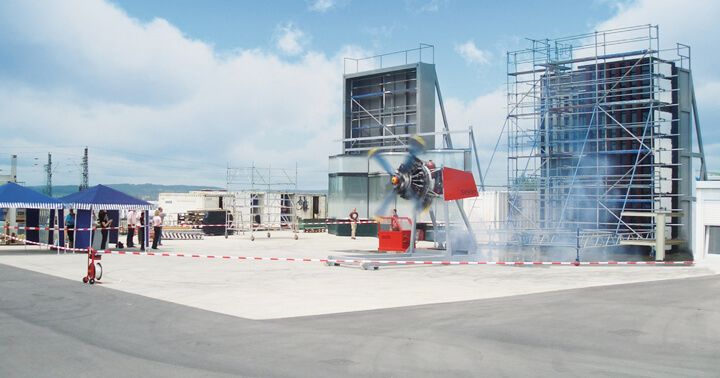